Over the weekend, there was a fatal motorcycle crash in Hendersonville County. According to WLOS ABC News Channel 13, the incident happened on Chimney Rock Road at Hominy Branch Road on Sunday night at about 9:30 p.m. Very few details about the crash have been released, but initial reports indicate that a female passenger on the motorcycle was ejected during the wreck. She reportedly hit a guardrail and suffered from a fatal head injury. The driver of the motorcycle was also injured in the crash. That person was rushed to a local hospital for treatment. At this time, law enforcement officials are looking into whether speed and intoxication could have been factors in this crash.

Motorcycle Crashes by The Numbers

Speeding was a factor in 33 percent of fatal motorcycle crashes in 2016.

The National Highway Traffic Safety Administration (NHTSA) is hoping to raise awareness about the dangers facing motorcycle riders on a daily basis. Their “Share The Road” campaign is all about calling attention to the types of driver behaviors that pose risks to motorcycle riders. These behaviors include aggressive and reckless driving, distracted driving and not looking prior to pulling out onto roadways or changing lanes. Motorcycles are smaller than traditional passenger occupant vehicles, so drivers are reminded to Look Twice before making lane changes or other abrupt traffic movements.

Motorcycle riders are still some of the most vulnerable roadway users. They don’t have the protection of steel cages, seat belts and air bags. Even with helmets, motorcyclists can become catastrophically or fatally injured in crashes with larger passenger occupant vehicles.

If you have been injured or if you have lost a loved one in a motorcycle accident in Asheville or in any of the surrounding Western North Carolina communities, contact the skilled and proven Personal Injury team at Davis Law Group, P.A. at 828-303-2842 for a free case consultation today. Bicycling in the Hendersonville area is extremely popular due to the availability of bicycle routes nearby. These rides showcase the area’s beauty along country roads, mountain trails and dirt roads.

The Blue Ridge Bicycle Club promotes healthy and fun lifestyles through cycling in Western North Carolina. The club offers organized group rides throughout the year. They are also a great resource for those looking for information on routes. 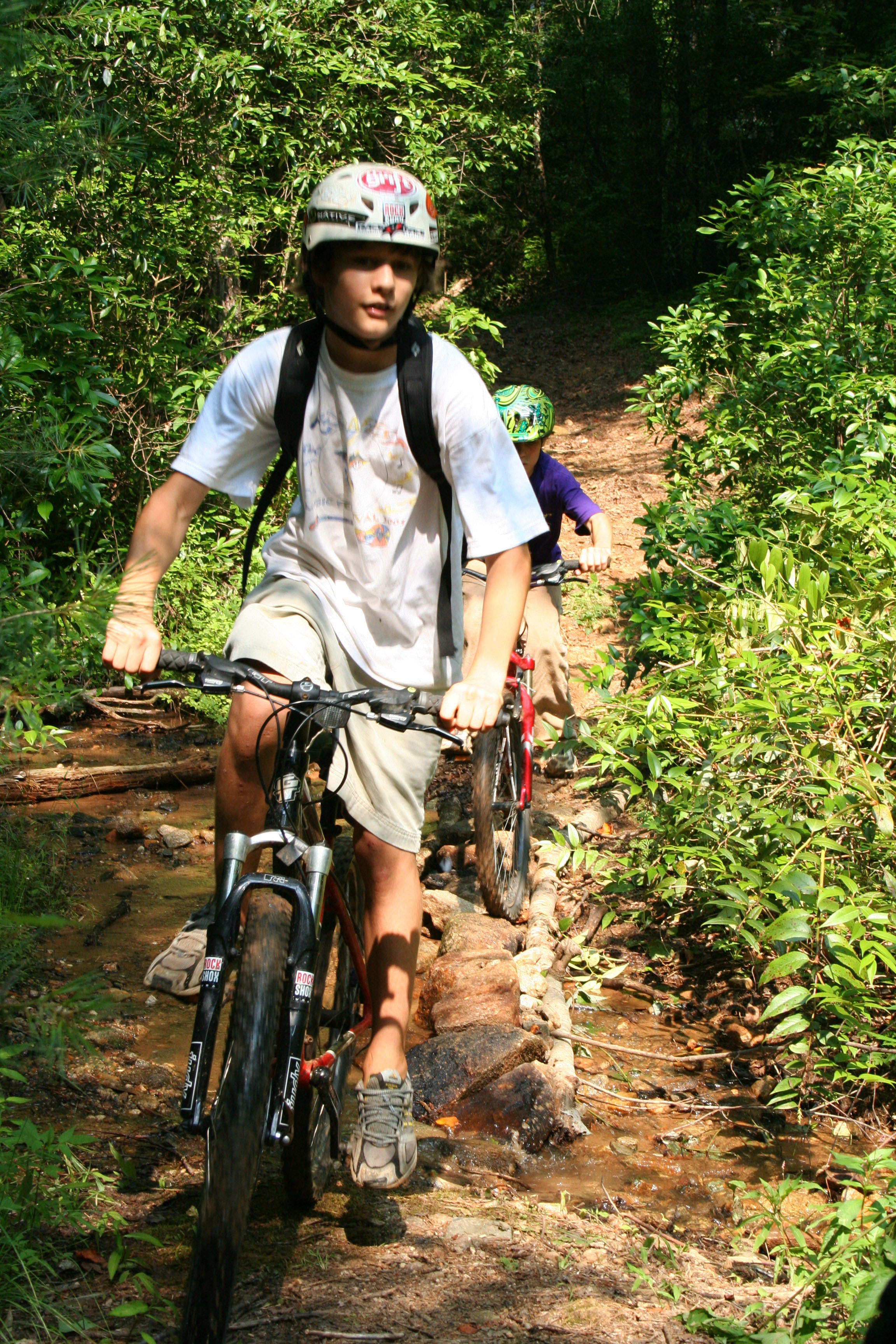 DuPont State Recreational Forest encompasses 10,473 acres in Henderson and Transylvania counties. It is situated in the Little River valley and includes waterfalls and 80 miles of roads and trails wandering through mountainous terrain. DuPont also has a Kids Skills Area, a path designed for kids (and kids at heart) to practice on obstacles and jumps. The forest is open to the public for hiking, mountain biking and horseback riding. Fishing is allowed with a valid NC fishing license. Hunting is by special permit only.

The Ride Kanuga Bike Park is open to the public for a daily, monthly or annual fee. Set up in the style of a ski resort, there is one way up the mountain, then multiple courses that are rated by skill level that you can take down the mountain. Each downhill course is only open to bikes and offers jumps and challenges designed specifically for this space. Bikes can be rented here, so you don’t need to bring your own.

The Riveter features several options for bike riding. The facility boasts a covered area with terrain for all types of bikes and skill levels. The outdoor riding area offers a wide range of features of a hillside. Bike rentals are available. See pricing for more information. Located near Sierra Nevada in Mills River.

The North Carolina Arboretum offers miles of diverse biking routes that meander through the scenic property. The trails range from easy for the novice rider to difficult, for the more experienced cyclist.   Please be mindful of hikers and Arboretum vehicles while on trails.

A greenhouse that once was home to red roses and rosebay rhododendron is now a cafe that showcases old motorcycles, local bands and 26 beer taps.

MILLS RIVER —�A greenhouse that once was home to red roses and rosebay rhododendron is now a cafe that showcases old motorcycles, local bands and 26 beer taps.

The menagerie of motorcycles —�displayed on the 7,000-square-foot building’s concrete floor and suspended from frames made of recycled steel —�is called the Greenhouse Moto Cafe, which opened recently at 4021 Haywood Road.

Transformation of the old Carolina Roses greenhouse is the brainstorm of former petroleum products salesman Jeff Herold, a Tampa, Fla., transplant whose love for motorcycles is evident throughout the glass house he fell in love with during past visits to the Hendersonville area.

“I just couldn’t get over it, every time I drove by,” Herold said. “I needed a place to put my bikes, and I thought, ‘That’s a neat building’ —�and everything else fell into place.”

He said the cafe, which has a homemade music stage and sells mostly craft beers from local breweries, will use a variety of food trucks until a kitchen is built.�He wants to provide a variety of cuisines, from hot dogs and hamburgers to Mexican and German.

“Not sure about the kitchen,” Herold said. “We’re just making things up as we go along.”

To test the waters, Herold held a “very soft opening” on March 15. The event drew only a handful of customers, most of whom had become curious after driving past the business while it was under construction.

“I like this place,” Wing said while taking cellphone pictures of the only Harley on display. “It’s eccentric —�very cool.”

Wing, a Brevard resident, building contractor and proud owner of two Harleys, said he thinks the cafe will become a big draw once other motorcycle riders learn about Herold’s greenhouse conversion.

“There’s a lot of bike groups around here,” he said. “All the way to Maggie Valley.”

Aside from the 60 Triumphs, BSAs and Italian-made Moto Guzzis that Herold spent 15 years collecting, the cafe is decorated with several bicycles and random collectibles, including three pianos and a clay sculpture of what appears to be a Jamaican Rastafarian. Wood for the hand-built bar and stage came from a 1940s factory that was being torn down in Columbus, Ind., Herold’s hometown.

“This place is a collection of everything I’ve seen that I thought was cool,” the owner said. “We like to reuse whatever we can.”

Among the cafe's growing legion of fans is Lisa Wilson, whose husband, Geoff, built the bar and played a key role in getting the greenhouse ready for business.

“It’s a good gathering place – a necessary addition to the (Mills River) area,” Lisa Wilson said. “It’s a work in progress, and it’s going to have a life of its own. It’s got all the potential in the world.”

Herold, who at age 54 opened the cafe without a solid business plan, says that much like a weekend motorcycle ride through the Carolina mountains, it doesn’t matter to him what twists and turns might be in store.

That’s because he’s letting his customers help plan the route.

“We never intended to have a music stage, but now we’ve got one,” he said.

Fletcher resident Kimberly McNeilly, who introduced friend Barry Moody to the cafe,�says she hopes the Greenhouse becomes a destination for Moody and other bike riders.

“I knew he’d want to see this place,” McNeilly said of Moody as she snapped cellphone pics of Herold hamming it up behind the bar. “He’s a major motorcycle boy.

“I hope this place makes it,” she added with a hopeful look. “It’s just so cool.”

The woman removed the shower from the counter and directed it between her legs, began to wash off the foam from the pubis. Then Alexei noticed that the bright red head of her clitoris peeped out of this black hairy cave. He climbed out as if alive. It could even be compared to a small penis, but instead of testicles, two petals of dark brown inner lips dangled casually.

The girl breathed often, not allowing herself to moan, because they could be caught at any moment. It gave her incredible pleasure. He pulled away from the papillae and kissed her plump lips again. Running his hand over his alluring chest and tummy, he sank lower.

She was smart and sharp on the tongue. So, as they say, do not put your finger in your mouth. The only flaw she carried and cursed in herself was her excessive sexuality. As soon as the man just touched her hand, this super sexy woman immediately took his breath away, his heart jumped to ninety, and his. Legs were already ready to spread themselves out to the sides, freeing the passage to the place where the fire of unbridled passion raged.

Do you trust me. Laura asked, copying it. At the very gate of the cottage, she looked around.