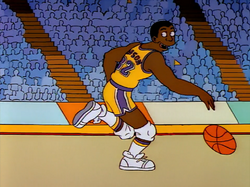 Maybe you didn't know it, but your life got substantially better today. Congratulations you! Why? Because FXX will begin streaming every single episode of The Simpsons beginning at 10 a.m. ET and wont stop until all 25 seasons have aired.

When a show lasts that long, it's safe to say almost everything has been covered and sports are no different. By our count there have been 28 different episodes centered on sports, covering almost everything that can be done on a field, ice, diamond or track. Sure you COULD watch hundreds of hours non-stop, or we can help you easily tune in and out to catch the 10 best sports episodes The Simpsons has to offer.

Why it's great: The core of this episode might be a World of Warcraft gag, but the subplot of Homer becoming a soccer referee is amazing. He takes to the pitch where Lisa is highly critical of his skills, before Homer calls his daughter a "flopper," which is put in his head by Ronaldo, who guest stars.

Why it's great: Lisa decides that she needs more extra-curricular activities on her resume, so she becomes the manager of Bart's Little League team. Applying "Moneyball" principles the team quickly sees success. A guest appearance from Mike Scioscia solidifies this as a good one.

Why it's great: This episode is an oldie, but a goodie. It's a riff on Days of Thunder and many other motorsport-themed movies, except transposed to the world of Soap Box Derby racing. There's no celebrity guest star in this one, but many of the early episodes didn't need one. It's just solid all around.

Why it's great: Homer taps into a pain some of us know all too well; seeing a team leave. He hears his beloved Springfield Isotopes are destined for a move to Albuquerque and staged a hunger strike at the stadium. The team exploits him and turns him into a mascot. All the while the rest of the family gain inordinate amounts of weight as they are forced to eat Homer's meal portions along with their own.

Why it's great: Homer put on his Tom Landry hat (literally) and becomes the head coach of Bart's Pee Wee football team after forcing Ned Flanders out of the job. Like any good parent, he immediately puts all his faith into Bart as quarterback, despite Nelson Muntz being more qualified for the job. Bart struggles, but a visit from Joe Namath (trapped in Springfield due to his car suffering vapor lock) lifts his spirits ... kind of.

Why it's great: This episode has a bevy of celebrity sporting cameos, and some of the biggest the show has ever seen. Homer is caught performing an embarrassing dance which quickly becomes a viral video; the NFL picks up on the success and wants him to help choreograph the Super Bowl half time show. With visits from Tom Brady, LeBron James, Yao Ming, Warren Sapp and Michelle Kwan, Homer learns just how hard that can be.

Why it's great: One of the core tenets of a great sports episode is tension, drama and competition. This has all three. Bart is getting showered with love from Homer because he's "good at sports," prompting Lisa to put on the pads and become one of youth hockey's best goalies. Separated on opposite teams, the kids need to square off for Homer's love in a dramatic conclusion.

Why it's great: In a ether-induced hallucination Mr. Burns thinks Homer is Pop n' Fresh and gives him $500 to start a local bowling team. The "Pin Pals" are the perfect union of skill and drunkenness, until Burns finds out and wants to be a part of the team too. The old millionaire is terrible, but they can't find the heart to kick him off the team when he makes specially-made uniforms for his new "friends."

Why it's great: It's a beautiful ode to professional boxing, with Homer discovering he has a genetic defect that cushions his brain from impact. He can take an incredible pummeling, so Moe channels his inner Don King to become Homer's promoter. Suddenly the local Springerfielder is in the fight of his life against Drederick Tatum (clearly modeled after Mike Tyson). Michael Buffer guest stars and makes this boxing episode truly authentic.

Why it's great: Everything. "Homer at Bat" is perfection rolled into 20-some minutes. This episode aired early in the series life, but is one of the most memorable for how many baseball players and references are made in a single episode. From Mr. Burns' crusade against sideburns, to "Wonderbat" this episode has it all. If you've somehow managed to miss this then it's an absolute must-watch.

Not too old if you're a tree, but for a television show? That's an eternity. Heck, most hope to make it a fraction of that time. Twenty-three years ago, the Tampa Bay Buccaneers looked like Creamsicles, Ozzie Canseco had hopes of a successful big-league career, and Bryce Harper was still nearly three years away from being born.

In those nearly two and a half decades, an animated institution, "The Simpsons," has and continues to leave its mark in the history books of classic American television. A cartoon that started off about a crudely-drawn yellow suburban family with a bratty son and oaf father has journeyed into space, feuded with a president and managed to feature three living Beatles as guests.

It really seems like the Springfield family has done it all in those 23 years, and don't think they haven't dipped their golden toes into the sports world as well. They've hung around with Hall of Famers, All-Stars, Olympic champions and the Capital City Goofball. Outside of a game itself, "The Simpsons" has provided us with some of the most memorable comical sporting moments in television history.

Part of the charm of the show is that despite all those wacky antics and mad-cap adventures, they're just like your family and mine: a bit goofy, a bit silly, a bit out of left field, but always loving, funny and genuine.

When you're successful for nearly a quarter century, you've become a rock; something dependable, something that's always there, not unlike the crack of the bat on a Saturday afternoon or the roar of a crowd at a football game on a crisp Sunday in October. When you think about it, it only seems natural that some of the greatest episodes are when the family and sports come together.

So let's take a walk down memory lane and look back at the "Pin Pals," "Dancin' Homer," Steve Sax's arrest and all the most memorable sporting moments in the great history of "The Simpsons."

17th episode of the twenty-eighth season of The Simpsons

"22 for 30" is the seventeenth episode of the twenty-eighth season of the American animated television series The Simpsons, and the 613th episode of the series overall. It aired in the United States on Fox on March 12, 2017. In a parody of 30 for 30, Bart goes from delinquent with detention to the star basketball player at Springfield Elementary. Lisa covers Bart's success for the school paper, and Homer becomes the team's coach. Things go awry when Bart gets involved with the mafia.

The story is a documentary about the rise and the fall of Bart Simpson's career on the Springfield Elementary School basketball team. It all started with a joke that got him in the longest detention in history, where he started shooting baskets in the detention room wastebasket. Bart became a starter and then a star, reveling in his abilities while also letting his success go to his head. Homer Simpson became the coach of the team, and Bart started disrespecting Homer, leading to ugly clashes between them. Fat Tony noticed this and came up with a plan to enrich both himself and Bart via Bart's unwitting point shaving practices (the mobsters would tell Bart how much they wanted the SES team to win by, and Bart didn't know this was based on a betting line that the mob would then cover and make a lot of cash from).

At the City Champions Final Four, Bart won the game after Homer choked him. However, Bart found out how much money Fat Tony was making, meaning that Fat Tony wanted him to lose the finals. The town hated him for that.

In the game, Milhouse (who was Fat Tony's other point shaving asset) tried to keep Bart from hitting the game-winning shot but failed. Lisa then used her journalism skills to get Fat Tony to back off his plan to murder Bart. When the mob boss was Bart's age, he was an incompetent player for the only city league team where he could play for: an all-girls' team.

Homer and Marge then tell the documentary crew that Bart's heyday didn't last much longer, as the minute he moved up to a league he was overshadowed by a tall kid on the court. The status of Lisa and Milhouse is outlined (along with a cameo by Stephen Curry), and the narrator of the story reveals himself to be Nelson's dad, Eddie Muntz, who gives Nelson sleeves for his vest and stays long enough just for a picture of the family to be taken before he disappears again.

Dennis Perkins of The A.V. Club gave the episode a B stating, "'22 For 30' dresses up The Simpsons’ formula in the gym togs of ESPN’s 30 For 30 sports documentary series, and, as far as stunts go, it’s a well-executed one. The arc of a traditional Simpsons episode and that of the average 'troubled sports figure' doc mesh up neatly, as Bart, after honing his crumpled paper ball shooting skills in an extra long detention, becomes the star of Springfield Elementary’s hoops team. Conflict comes in various forms: Bart adopts an entitled attitude; Homer coaching the team leads to father-son drama; and, naturally, Fat Tony pressures Bart into a little point-shaving. The episode—woven together further by the silky-smooth tones of professional sports voiceover legend Earl Mann—works by essentially wallpapering over the choppy and under-realized storytelling endemic to much present-day Simpsons with the glib packaging of the feel-good (or feel-bad) sports narrative. It’s a cheat, but an ambitious and well-realized one that results in a refreshing little season 28 detour."[1]

On Saturdays, Anna Mikhailovna's like-minded people gathered at our house, locked. Themselves in a large room and prayed. For the time being, this circumstance did not attract my attention, and once, I looked through the keyhole and saw women. playing cards.

Our house was old, pre-revolutionary construction, deep - together with the roof, buried under thickets of ivy and wild grapes.

In the age of the techno era, your whole life can be under someone's close control. His adventurous life full of adventures, risk and excitement frightened Christina. But at the same time aroused irresistible curiosity, excited the blood with unknown sensations. She did not ask why and why he was doing it, whether he would ever stop and what purpose he ultimately pursued.

My fingers and toes ached, I no longer felt my boobs, legs and arms. Gritting my teeth, I crawled and crawled, not paying attention to anything. I crawled, plowing through this virgin snow with my body. I was covered in snow: my hair, my face and my whole body. I understood that only movement can save me and therefore did not stop.