Create excessive amounts of pollution as to wipe out the humans and create more Orgs.

The Mut-Orgs are a villainous trio of mutant/Org hybrids from Power Rangers Wild Force.

The Mut-Orgs were originally a trio of Org spirits that had been sealed away after the war 3,000 years ago and 999 years in the future, Ransik came across them. They promised him power in exchange for their release and he eagerly freed them, especially after he found out they wanted to destroy humans.

Upon gaining their freedom, they copied Ransik's mutant DNA and used it to create new bodies for themselves, becoming the Mut-Orgs. They then gave Ransik some of his own abilities, namely his power to transform his bones into swords then pull them from his body.

The Mut-Orgs then headed back in time to the year 2002, where they began attacking Turtle Cove until the Silver Guardians arrived, including Wesley Collins, the Red Time Force Ranger, and Eric Myers, the Quantum Ranger. However they easily fought their way through the Guardians, even after Wes and Eric morphed, until the Wild Force Rangers arrived and the Mut-Orgs decided to go elsewhere in order to perform their main objective, generate enough pollution to create more Orgs and get rid of the humans, so they would rule the future. The Mut-Orgs had another confrontation with the Rangers and managed to easily fight them off, until Jen Scotts, the Pink Time Force Ranger, who'd been assigned to bring them in, arrived and managed to distract them long enough to allow the rangers to retreat. The Mut-Orgs eventually found their way to the Nexus where they joined forces with Master Org and then headed for an industrial plant so as to generate high amounts of pollution.

The Mut-Orgs are quite powerful, proving almost unbeatable in combat before Ransik got rid of their mutant halves. They can fire energy blasts, but their most powerful attack is their "Spirit Bomb", an enormous sphere of energy that they generate by placing their weapons (or in Kired's case, claws) between them in a triangle formation. The Mut-Orgs then combine their energies to form the Spirit Bomb, then send it at their target. Kired is also able to fly. 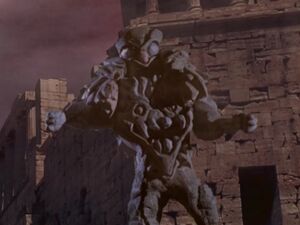 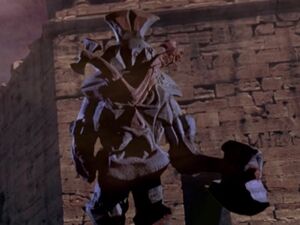 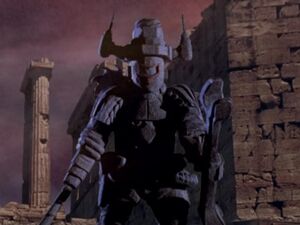 Ransik: [Ransik tells Wild Force and Time Force about why he wants to help stop the Mut-Orgs] It's all my fault. I was the one who created the Mut-orgs. In the years before I donned my mask and started the most notorious crime gang in history. I was shunned by humans. Wandering aimlessly I eked out an existence in the shadows of the utopia made possible by Time Force. It was in those shadows that I found others forgotten by time...

Master Org: We are Orgs. Humans imprisoned us in these stone tombs long ago.

Ransik: What do you want?

Master Org: Revenge. Free us and we will punish humans for this. We will give you great power for your help.

Ransik: If humans are your enemy, then our quest is the same.

Ransik: [Narrating] The Orgs copied my mutant DNA and created new bodies for themselves. Half mutant, half Org. That is how the Mut-Orgs came to be. In return for my help they made my entire body a weapon. Back then I was filled with rage. I hungered for power and because of it, I freed those monsters. But now, I have a chance to make things right and help you destroy them. If you will trust me.

Jennifer 'Jen' Scotts: No matter how much we want to, we cannot change the past. But we can work for a better future.

Click here to toggle editing of individual sections of the page (if possible). Watch headings for an "edit" link when available.

Check out how this page has evolved in the past.

If you want to discuss contents of this page - this is the easiest way to do it.

View and manage file attachments for this page.

A few useful tools to manage this Site.

See pages that link to and include this page.

Change the name (also URL address, possibly the category) of the page.

View wiki source for this page without editing.

Notify administrators if there is objectionable content in this page.

Something does not work as expected? Find out what you can do.

Wikidot.com Terms of Service - what you can, what you should not etc.

Anna, echoing him with zeal, repeated. - To love and feed each other and your children; help in trouble and illness. We swear. - having kissed three times according to Russian custom, Kolka jumped to the floor and, taking Anna in his arms naked, put her to the table. He filled her glass with champagne and his own cognac to the brim, they drank at brotherhood and kissed tightly, hugging each.

Gosha became passionate again, feeling the passion of his wife. Harmony has come to their home. It was necessary to have a lover earlier. So it seemed to her.

And through such a trifle you want to continue to carry boxes at your work. -If you do not agree now, I will squeeze you. Until you feel bad.

I got up from the chair and went to bed. Did you happen to fall in love with me. - I uttered in a whisper and turned away not to look it in my eyes, I wanted to cry. Well, that's the whole reason. I saw how you didnt look away from me.