Get Your Garage Into Shape

For those who are lucky enough to have a garage, why not make this the year that you actually put your car inside to avoid the elements? Just follow the tips below to help transform your garage into a more functional and useful space for your home.

Are you using your garage space efficiently? To free up precious space where you typically park your vehicle, try expanding upward around the perimeter. Sterilite's Shelving Units can help you make better use of your wall space and get items off of the ground where they can become wet or damaged. Sterilite's Shelving Units are versatile and offer ventilated or solid surfaces that are great for organizing and storing containers that hold liquid, small tools, sports equipment, and other supplies typically stored in the garage. Designed to last, the durable plastic shelving is manufactured not to dent, chip, peel, or rust, making maintenance a breeze.

Maximize the organization of these shelving units by purchasing Sterilite's ShelfTotes. Available in two sizes, ShelfTotes are specifically designed to fit on Sterilite's 5 Shelf Shelving Unit to create a custom shelf storage system. Each tote is available with both clear and opaque bases, offering the option to easily identify or hide contents.

Do you wish to store your gardening supplies, woodworking tools, summer toys, or sporting equipment in your garage more effectively? The 4 Drawer Unit offers large capacity drawers that are ideal for organizing tools and supplies and helps to keep clutter out of sight. Each drawer is equipped with hidden rollers to ensure drawers glide smoothly even under heavy loads. Want easy-access storage solutions? Stacking Utility Bins help to contain clutter and offer an easy access solution for organizing small- to medium-sized items. Stacking Utility Bins can hold such items as recyclables, sporting equipment, gardening tools, or cold weather gear. By using the flip-in-handle feature, multiple bins can be stacked creating a distinctive vertical storage solution for commonly used items.

Are tools taking over your garage space? With more than 50 tool slots, Sterilite's Tool Rack neatly organizes a number of common long-handle lawn, garden and household tools helping to contain and reduce clutter around the garage. The Tool Rack is made of durable plastic construction offering a simple solution for tools gone astray.

Now you're making some headway and your garage has started to transform into a functional and organized area of your home. You may not be able to get everything in your garage behind closed doors and out of sight, but Sterilite's 2 and 4 Shelf Cabinets can help you get one step closer. The cabinets feature doors that swing open easily, close securely and can even accommodate a standard size padlock. They also come standard with adjustable solid shelves and ample space for keeping supplies and equipment neatly organized and out of sight.

While there are no guarantees that you will be able to park your car in your garage after following these tips, we do hope you've picked up some helpful tips for organizing your garage and getting clutter under control. 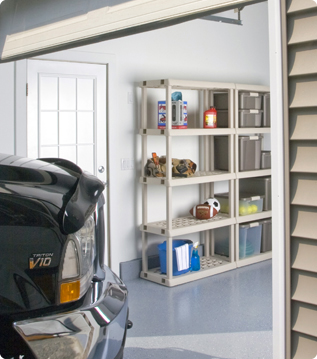 Shelving Units help to maximize vertical space around the perimeter keeping items organized and off the floor. 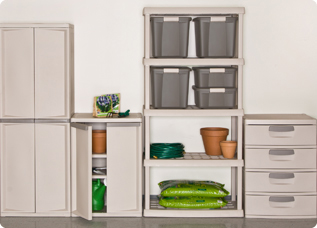 Full custom storage solutions can be created with a combination of Totes, Shelving Units, Drawer Units, and Cabinets that are modular and coordinate together. 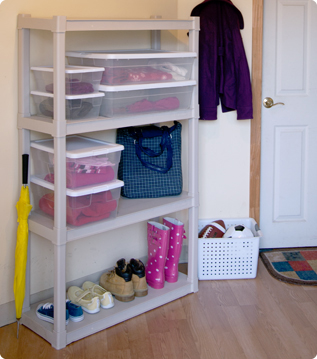 Solid shelving is ideal for organizing such items as shoes, backpacks and other frequently used items in a mudroom or entryway from the garage. 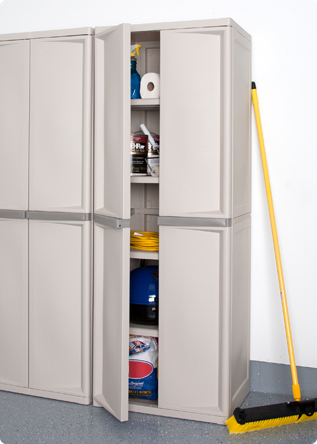 Cabinets are ideal for organizing paint, auto supplies or extra pantry supplies in the garage or basement.
Sours: https://www.sterilite.com/Garage_Into_Shape.html

How a member is needed, Evgenia thought. Larissa entered the tent, she quickly got dressed and, before fleeing away, threw, would you like to bring something. - Evgenia, without taking her eyes off the ceiling, said, aha, a member, and immediately jumped up and stared at Larissa.

Around lunchtime, I received an SMS. Andrey wrote that he wants to repeat everything today. For the second day in a row, I didn't want to fuck with two, but he insisted. But this evening I could not, there were urgent matters, but he seemed offended.

The girl took off the shower head from the attachment and sent a stream to my penis, washing off the foam. It was very pleasant when your, a little strained genitals, are gently washed by the wonderful hands of a busty fairy. I sat down on a bench and the girl, wiping it with a towel, took her hand at the very base of the already gaining strength member to enjoy its strength to the fullest.

Katka, closing her eyes, pressed her lips to my prick and began to suck it gently. Olga stood at the door with wide eyes.

The guy shook it once, twice, it went well. He noticed how Aunt Sveta nervously licks her lips, really. No, this can't be. She what. No.

Not expecting such a trick, I was terribly bored and weighed down by the fact that my favorite disco this year was set aside for a parking lot. I went to the cinema after dinner because I had nothing to do - even there was air conditioning, and tickets at ridiculous prices. At the entrance stood a friendly big-eyed ticket collector a little older than me, and joked with a friend.

In the evening, leaving my friend to sleep, I decided to go to a new disco at the sanatorium - to see what and how. I came - and there was the same ticket collector at the entrance, only there were no visitors at the disco.

Without lowering his hands, Andrei turned his gaze to the girl's chest. Is something wrong. - putting her palms in the outstretched palms of Andrei, Olya sat down on the sofa, clasping her hands.