The RGD-5 (Ruchnaya Granata Distantsionnaya) English "Distance Hand Grenade" or "Time-delayed Hand Grenade", is a post World War IISoviet anti-personnel fragmentation grenade, designed in the early 1950s. RGD-5 was accepted to service in 1954, and is still in service with many of Russia's former client states and has been supplied to Iraq as well as other Arab nations.

The grenade contains a 110-gram (3.9 oz) charge of TNT with an internal fragmentation liner that produces around 350 fragments and has a lethality radius of 25 metres (82 ft).[1] The weight of the grenade with the fuze fitted is 310 grams (11 oz). Typically, the RGD-5 uses the 3.2 to 4 second UZRGM fuze, a universal Russian type which is also used in the RG-41, RG-42, and F1 grenades. The RGD-5 may be fitted with the more modern DVM-78 fuze, or variants of the UZRGM with delays of between zero (i.e. instantaneous for use in booby traps) and 13 seconds. It is also possible to screw an MUV booby-trap firing device into the fuze well.

The grenade is egg-shaped with no external ribbing, except for a lateral ridge where the two halves of the grenade join. The surface has a few small dimples on it with a green or olive drab, paint-scheme. The RGD-5 can be thrown about 35 to 45 metres (115 to 148 ft) by the average male soldier and when thrown, it is possible to hear a loud "pop" as the fuze ignites and begins to burn. The grenade can inflict injuries (e.g. penetrating eye wounds) out to 15 metres (49 ft) from the site of detonation. Victims caught within 3 metres (10 ft) of the detonation site are almost certain to be killed or severely wounded.

This grenade is still manufactured in Russia with copies produced in Bulgaria, China (as the Type 59) and Georgia. Many millions of RGD-5s and its clones have been manufactured over the years and although not as advanced as more modern grenades which are specifically designed to penetrate CRISAT standard body armour, the RGD-5 is still an effective and inexpensive weapon. A single RGD-5 grenade costs around US$, making it highly affordable during a major conflict when many grenades are required.

The URG-N is a reusable training model of the RGD-5 of cast iron construction (rather than sheet steel) and a modified fuze containing a compound which simulates the detonation of the grenade. The body of this grenade is painted black with white markings.

The AK-47 can mount a (rarely used) cup-type grenade-launcher that fires standard Soviet RGD-5 hand-grenades. The soup-can shaped launcher is screwed onto the AK-47’s muzzle.[2] It is prepared for firing by inserting a standard RGD-5 hand-grenade into the launcher, removing the safety pin, and inserting a special blank cartridge into the rifle's chamber. With the butt-stock of the rifle on the ground it can be fired.

(OPERATORS list includes past, present, and future operators when applicable)

Fuse Detonation
Design relies on timed / fuse detonation. (Material presented above is for historical and entertainment value and should not be construed as usable for hardware restoration, maintenance, or general operation - always consult official manufacturer sources for such information)

*May not represent an exhuastive list; calibers are model-specific dependent, always consult official manufacturer sources.
**Graphics not to actual size; not all cartridges may be represented visually; graphics intended for general reference only.

The RGD-5 (Ruchnaya Granata Distantsionnaya, English "Hand Grenade Remote"), is a post–World War IISoviet anti-personnel fragmentation grenade, designed in the early 1950s. The RGD-5 was accepted to service in 1954. It is still in service with many of Russia's former client states and has been supplied to Iraq as well as other Arab nations. 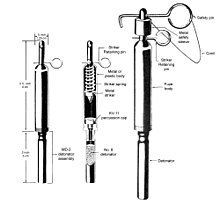 The grenade is egg-shaped without ribbing, except for a lateral ridge where the two halves of the grenade join. It weighs 310 grams (11 oz), is 117 millimetres (4.6 in) in length and 58 millimetres (2.3 in) in diameter. The surface has a few small dimples with green or olive drab paint.

The RGD-5 can be thrown about 35 to 45 metres (115 to 148 ft) by the average soldier and on throwing, the grenade makes a loud "crack" sound as its spoon falls out activating the fuze.

It is still manufactured in Russia with copies produced in Bulgaria, China (as the Type 59) and Georgia. Millions of RGD-5s and its clones have been manufactured over the years and although not as advanced as more modern grenades specifically designed to penetrate CRISAT standard body armour, the RGD-5 is an effective and inexpensive weapon. A single RGD-5 grenade costs around $5 US, making it affordable.

AK-47 with a Kalashnikov grenade launcher mounted to its muzzle

The AK-47 can mount a (rarely used) cup-type grenade-launcher that fires standard Soviet RGD-5 hand-grenades. The soup-can shaped launcher is screwed onto the AK-47’s muzzle.[5] It is prepared for firing by inserting a standard RGD-5 hand-grenade into the launcher, removing the safety pin, and inserting a special blank cartridge into the rifle's chamber. With the butt-stock of the rifle on the ground it can be fired.

The URG-N is a reusable training model of the RGD-5 with a modified fuze containing a tiny explosive charge which simulates the detonation of the grenade. The body of this grenade is painted black with white markings. 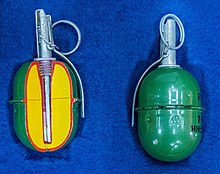 On 10 May 2005, Vladimir Arutyunian, a Georgian citizen and ethnic Armenian, waited for the United StatesPresidentGeorge W. Bush and Georgian President Mikheil Saakashvili to speak in Tbilisi's central Liberty Square. When Bush began speaking, Arutyunian threw an RGD-5 hand grenade wrapped in a red plaid handkerchief toward the podium where Bush stood as he addressed the crowd. The grenade landed 18.6 metres (61 ft) from the podium, near where Saakashvili, his wife Sandra E. Roelofs, Laura Bush, and other officials were seated.[7]

The grenade failed to detonate. Although original reports indicated that the grenade was not live, it was later revealed that it was.[8] After Arutyunian pulled the pin and threw the grenade, it hit a girl, cushioning its impact. The red handkerchief remained wrapped around the grenade, and it prevented the striker lever from releasing. A Georgian security officer quickly removed the grenade, and Arutyunian disappeared, but was later arrested.[7][9]

Notes: The F-1 is a WWII-vintage fragmentation grenade that continued to be employed long after that war, and is still encountered today. F-1 grenades encountered in Lebanon in the mid-1980s were encountered with fuses of anywhere from 0 to 13 seconds delay; it is not known whether these different fuses are readily-available or were an experiment (the fuses had Russian markings, but have never been encountered anywhere else).

Notes: These are the standard Bloc grenades for screening smoke purposes, and in addition to being thrown, may be projected from vehicular smoke projectors. The RDG-2 grenade can produce conventional white smoke, or there is also an RDG-2Ch version that will produce sight-obscuring and IR-obscuring black smoke. Dense smoke is produced for only 18 complete phases (90 seconds). The RDG-2Kh looks similar and is the same size, but produces irritant gas for 12 complete phases (60 seconds). The RDG-3 is also similar to the RDG-2, but produces orange smoke for marking purposes.

Notes: The RGD-5 is a reasonably modern fragmentation grenade, and (with the F-1) is presently the standard Bloc hand grenade.

Notes: This is a Russian offensive grenade, used when controlled fragmentation is necessary. It is similar to the RGO, but has a thin aluminum casing with no prefragmented content, and a smooth outside. This grenade is rarely encountered outside Russian units.

Notes: This is an improved and slightly lightened version of the RGD-5, used primarily to provide controlled fragmentation effects in close assault situations. It is in common use by Spetsnaz and other Warsaw Pack special units, but not common outside of those units.

Notes: This is a more modern Russian hand grenade, most often found in the hands of Russian troops, and little exported outside her borders. It consists of a steel body with the lower half notched and the inner body prefragmented for a large amount of fragment production. It is a standard sort of fragmentation grenade.

Notes: This is one of the standard Warsaw Pact fragmentation grenades and was widely exported to former Soviet client states in Africa and Latin America. It is similar in appearance to the RGD-5, but is more effective, with a wider bursting radius.

Notes: The RKG-3M is a slightly improved version of the RKG-3, but both are rather primitive, hand-thrown antitank grenades. It requires a very brave or very desperate soldier to use one of these grenades.

Notes: This is a Russian incendiary smoke grenade normally used during assaults to provide screening smoke and a few incidental casualties among the enemy. The grenade may be hand thrown or projected by an attached rocket motor to a base range of 25 meters. (When using this method, the ZDP uses Grenade Launcher skill.) The ZDP uses white phosphorous to provide smoke and produce casualties. The width of the smoke cloud is the same as the burst radius.

The 2B25's noise level reportedly "does not exceed that of a Kalashnikov AKMB assault rifle fitted with the PBS-1 silencer," while the system itself "produces almost no muzzle flash or smoke."

Spetsnaz special operators have a long history going back to the Red Bolshevik Guard, but little is known about them because of the unit's secretive nature.

The Spetsnaz are organized differently than US special operations forces in that they have units in multiple military branches, all with their own specialized training.

Numbering around 15,000-17,000, most Spetsnaz are comparable to US Army Rangers, but about 1,000 of them are on par with the US Army's Delta Force or Navy SEALs, according to the book "Spetsnaz: Russia's Special Forces" by Mark Galeotti.

It also makes sense that Spetsnaz forces received the new mortar system first, given that they usually "get the first pick of new types [of weapons], and also enjoy much greater freedom to customize and "mix and match"" Galeotti wrote.

Below are 11 of the most commonly used Spetsnaz weapons, according to Galeotti.

The standard Spetsnaz weapon, according to Galeotti, is some version of the 5.45mm AK-74 rifle. Seen here is the AK-74M, which is also the standard issue for much of the Russian Army. It weighs about 8 pounds and has a 30 round magazine capacity.

In May, Moscow announced that it would replace the AK-74M with the AK-12 and AK-15. As such, it's possible that Spetsnaz operators have already gotten their hands on the rifles.

Another AK-74 model that the Spetsnaz use is the short-barreled AKS-74U carbine. Also known as the "Krink", it was originally developed for the Spetsnaz in the mid-1970s and has a nifty side-folding stock, according to The Firearm Blog.

Some Spetsnaz operators sport a slightly different AKM fitted with a GP-25 grenade launcher. The AKM, which is a modernized version of the AK-47, fires 7.62 mm rounds up to 383 yards.

Spetsnaz snipers play an important role in the elite force, and they carry a variety of weapons. Although it's less commonly used today, some still prefer the SVD Dragunov, which fires 7.62 mm rounds and can hit targets up to 1312 yards out.

Another rifle used by Spetsnaz snipers is the SVDS Dragunov, which is an advanced, lighter version of the SVD with a folding-stock. It was originally designed for Russian paratroopers — the VDV.

Seen here is the bolt-action SV-98 sniper rifle, which the Spetsnaz have begun using more frequently. It usually has a scope with a range of about 1,110 yards, according to Galeotti.

For stealth missions, Spetsnaz are more likely to carry the VSS Vintorez silenced sniper rifle, which the soldier on the front right is holding. It fires a heavy 9x39mm round, according to Galeotti, but is not as accurate at long-range shots. This weapon has become a "trademark" for the Spetsnaz, and has been used a lot in Crimea.

THE PKP Pecheneg general purpose machine gun is Spetsnaz' main squad weapon, according to Galeotti. It fires a 7.62x54mm round, according to thefirearmblog.com, and began to be used by the Russian military in 2001. The PKP is similar to the US' M249 machine gun. 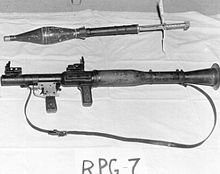 In the same time. Normally. Vera nodded. They kissed goodbye.