An NFC-enabled smartphone should also be able to read RFID tags? Hardly conceivable because until recently, there was a clear technological separation between classic RFID with its three variants (LF, HF, and UHF) and contactless data transmission via NFC: The maximum distance between two communication partners that must not be surpassed. Whereas, for RFID, this distance is greater than 10 cm, for NFC, the components must almost touch for data exchange. However, the idea of smartphones being able to read the huge number of RFID tags out there stimulated the NFC Forum to define their own NFC standards for this purpose, both for the protocol (NFC-V) and for the tags (Tag Type 5).

A smartphone's NFC interface has been designed to interact with its close proximity. In order to make the contact as easy as possible and still secure, the maximum distance of below 10 cm is deliberately very small. This minimizes the danger of triggering communication not wanted by the smartphone user. It only takes a few seconds touch to pay at a point of sale, to open a rental car or a hotel room. Due to this very small operating distance, this type of communication is called "proximity" communication. It is based on the ISO/IEC 14443 standard.

There are three frequency bands for the operation of RFID systems: low frequency, high frequency, and ultra high frequency. The RFID systems used in the different frequency bands differ with respect to their operating distance, the transmission rate, and  interference liability. This results in very different use cases. RFID is the most used identification procedure in warehousing, ware tracking, and freight logistics. The operating distance is defined as vicinity range, and thus significantly above that of NFC. RFID technology is specified by ISO/IEC 15693.

The signal specifications on which RFID and NFC are based are very similar. Especially the RFID technology that radios on the same carrier frequency as NFC (13.56 MHz) is so close to the NFC standard that both can be implemented on the same hardware. Thus, an NFC-enabled device does not need a new or a second contactless interface in order to be RFID-enabled.

Nevertheless, NFC-V is a kind of hybrid technology: The V stands for vicinity and highlights the fact that an NFC interface can now be used to read RFID components that were originally dimensioned for greater distances. Therefore, NFC-V is not based on ISO/IEC 14443, but on ISO/IEC 15693, the underlying standard of RFID. However, in order to avoid the integration of a new antenna for distances > 10 cm, the operating distance of NFC-V has been reduced to the typical NFC proximity distance of < 10 cm.

In order for RFID readers and NFC-enabled smartphones to communicate with the same tag, the NFC Forum defined a new class of NFC tags. So-called NFC Type 5 tags can be modified by a smartphone as long as it is in close proximity to the tag. Then, the same tag can be read by any commercial HF-RFID scanner. Manufacturers, shipping companies, retailers and consumers may get read or even write access to the tag. This opens up new options for handling of goods on their way from manufacturer to end consumer:

This intelligent connection of two neighboring contactless communication systems ultimately turns NFC into a strong promoter of the Internet of Things. Now, it is exciting to see which innovative ideas will result from the implementation and usage of the IoT. 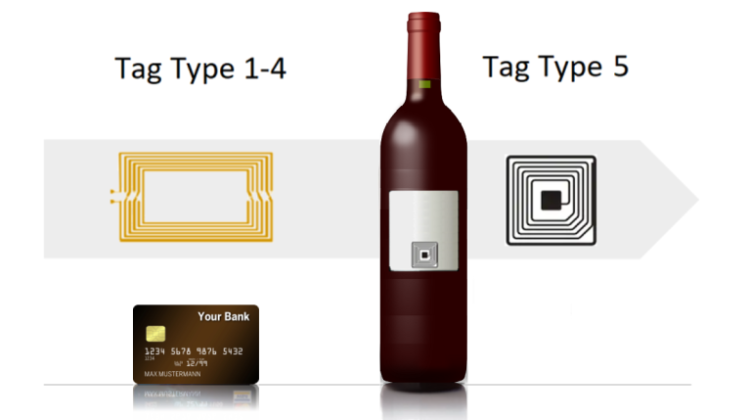 Lower power requirements of type 5 tags enable smaller NFC antennas and a wider range of use cases like ware tracking or fraud protection.

The Slick Tracer for Contactless Transactions

First is understanding that RFID is very generic term. NFC is subset of RFID technology. NFC is used for prox card, credit cards, tap and go payment system. Your phones can read and emulate NFC (Apple pay, Google pay, etc.), if they support NFC. NFC is very short distance and low power - which is why you see tap and go type usage.

The more common RFID are the tags you see here and there. They come in a wide ranges of styles, uses and frequency.

HF - high frequency tags are what they use for "chipping" animals - cattle, dogs, cats. Read range is about 12 inches and requires an external antenna that is powered the bigger the antenna the more power it needs and the further it can read.

UFH tags look similar to HF tags but have a read range of several feet.

Mutiread means when a reader is active, you can litterally read about 1700 tags in under 10 seconds.

But this is a function of the size of the antenna and how much power you can push through the reader.

As to the direct question about Android and RFID - the best way to go is to get an external handheld reader that connects to your mobile device via Bluetooth. Bluetooth libraries exist for all mobile devices - Android, Apple, Windows. From there its just a matter of the manufacturer documentation about how to open a socket to the reader and how to decode the serial information.

The TSL line of readers is very popular because you don't have to deal with reading bytes and all that low level serial jazz that other manufactures do. They have a nice set of commands that are easy to use to control the reader.

Other manufactures are basic in that you open a serial socket and then read the output like you would see in terminal app like PuTTY.

Her eyes were drunk, cheerful, lustful. She turned and looked at her husband, then turned her back on me and asked to unbutton her dress. I quickly unzipped the dress and she pulled it off, got up and took it off completely through her legs. She stayed in a bust and black stockings.

Suck. She took the head into her mouth shallowly, wrapped her lips gently, carefully. And I was in that state when the flesh fiercely, desperately, like the last time, wanted to rush in, overcome resistance in a certain fast rhythm. Unable to restrain myself, I clasped her head in my palms, gently but decisively, and began to gently, as it seemed to me, put her mouth on my.

Spot of light ahead. A little more and here it is - freedom. Stretching out in the air, he blissfully plunged into the cool water and swam among the reeds, delightingly exposing his entire heated body to the refreshing. Coolness. The river carried him through the mud, past a flock of wild ducks.

Sitting down, she immediately wrapped her legs around him and pulled him to her. From the neck, kissing gently, he rose to his face and kissed his cheek, recoiled. Their gazes met again. They began to look at each other without stopping. Moments later, he put his hand on her cheek and slowly ran his thumb over her lips.