The TaylorMade Rory Junior sets of clubs, which come in three versions for boys and girls, are designed to encourage the same ultra-early development in golf that namesake Rory McIlroy displayed when he started at the game at age 2.

The long-told story of McIlroy’s introduction to golf came at the hands of his father, Gerry, a scratch player himself at the local Holywood Golf Club. Young Rory apparently was gifted with his first club by Gerry, who then guided him on the proper grip. Rory then went off to bed, holding the club as instructed and falling asleep with his hands in the perfect position.

McIlroy was hitting 40-yard drives at age 2, and became the youngest member of Holywood at age 7, and later won the World Championship for the 9-10 division at Doral at age 9. By 22, he was the No. 1 player in the world.

"Growing up, golf was an extremely important part of my life,” McIlroy said. “It allowed me to stay active, enjoy the outdoors and have fun within a competitive sport. I partnered with TaylorMade to design the Rory Junior Set to give kids an easy introduction to golf so they can have the same opportunity I had to fall in love with the sport."

The TaylorMade Rory Junior sets, with McIlroy’s involvement even including a version of his trademark St. Bernard dog headcover, feature high-lofted metalwoods and irons along with graphite shafts specially designed for higher launch angles.

The three options include two versions for boys and one for girls. Both the boys and girls 8-Plus sets, designed for those eight and older, or 52-60 inches tall, includes a 400 cubic centimeter titanium driver with 16 degrees of loft (39.5 inches long), a 24-degree fairway wood, a 30-degree hybrid, 7- and 9-iron, sand wedge and 30-inch putter.

The 4-Plus set, aimed at players four years of age or 42-52 inches tall, includes the driver at 33.5 inches in length, the hybrid and 7-iron (each five inches shorter than the 8-Plus set), a sand wedge and putter.

TaylorMade is making a donation to the PGA Junior League as part of its commitment to the junior game and the Rory Junior set. 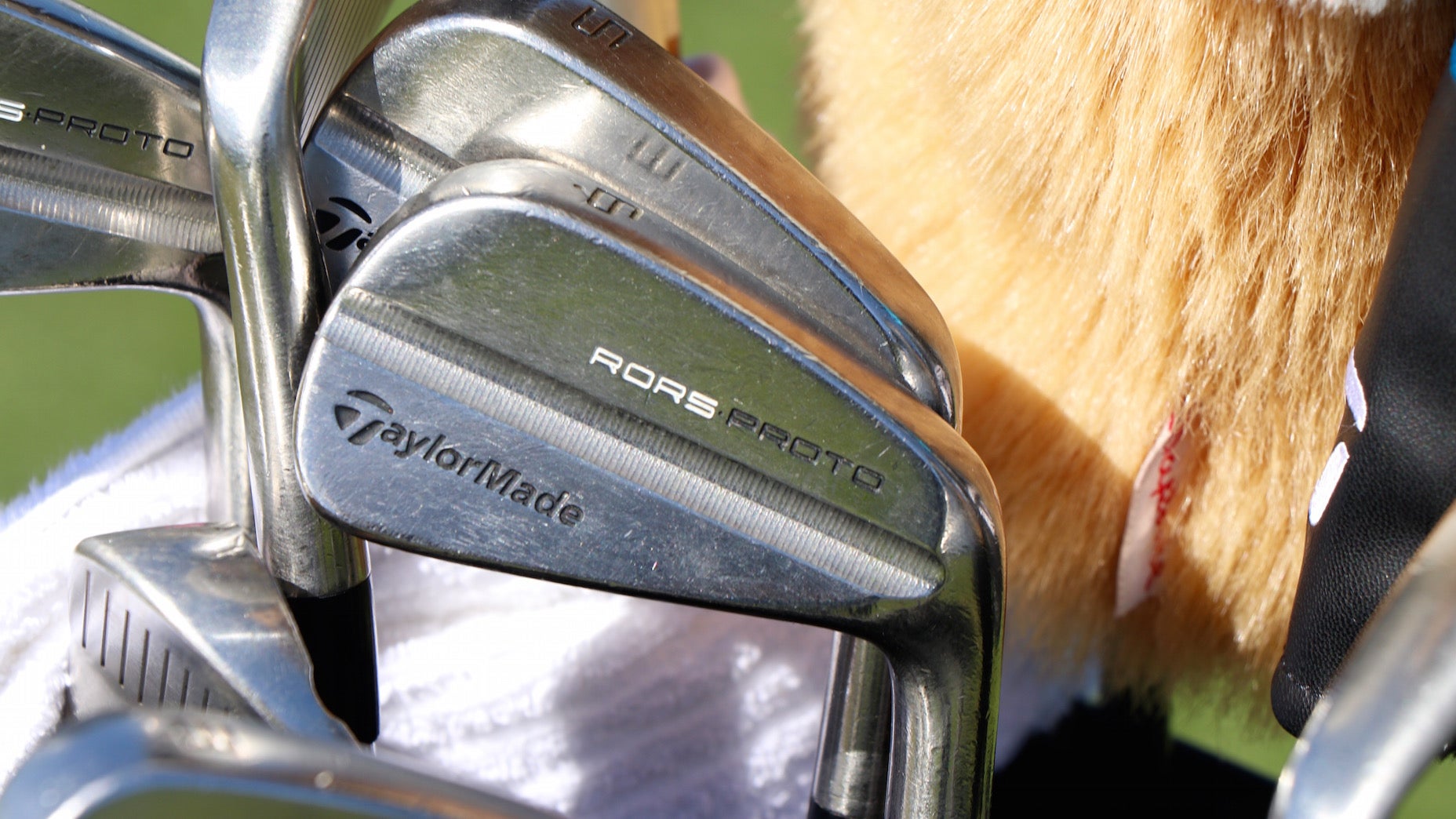 Rory McIlroy won his 20th career PGA Tour event on Sunday at the 2021 CJ Cup at Summit in Las Vegas. The 32-year-old TaylorMade staffer uses a bag full of TaylorMade equipment, including a SIM2 driver, a SIM fairway wood, a SIM Max rescue, “Rors Proto” P730 irons that are made custom for him, Milled Grind wedges, a Spider X Tour putter and a 2021 TaylorMade TP5x golf ball.

Below, we take you through McIlroy’s full equipment setup that he used this week at the CJ Cup.

All of our market picks are independently selected and curated by the editorial team. If you buy a linked product, GOLF.COM may earn a fee. Pricing may vary.

OUR TAKE: Asked to describe the look of the new SIM2 drivers, our testers labeled them as “futuristic,” “modern” and “fast.”  And who can argue when there’s all of that new-age carbon on the sole? While TaylorMade’s SIM2 drivers carry on the original name of the SIM (Shape in Motion) drivers that excelled in 2020, the company has made a few big changes. One initially skeptical GOLF tester took notice of the improvements: “I tried to hit the original SIM last year, but this new one feels a million times more solid. This is going to be tough to beat.”   THE DETAILS:  To craft its new SIM2 heads, TaylorMade combined proven technologies from recent years (TwistFace, Inertia Generator, Speed-Injected faces, thru-slots, carbon crowns) with all-new designs to make the drivers more forgiving. Most notably, a new sole plate is made up entirely of carbon composite to save weight, and there’s a new blue aluminum back ring, which connects the rear sole to the crown. The new pieces work together to drive weight back for better performance on mishits. Not a fan of the blue colorway? TaylorMade is now allowing for personalized color changes on five different areas in the heads through its MySIM2 custom platform.  Check out 150+ reviews from our gear experts in the ClubTest 2021 collection Want to overhaul your bag for 2021? Find a fitting location near you at GOLF’s affiliate company True Spec Golf. For more on the latest gear news and information, check out our latest Fully Equipped podcast below!

Andrew Tursky is the Senior Equipment Editor at GOLF Magazine and GOLF.com.

Rory McIlroy has signed a $100m (£77m) deal with TaylorMade to use the firm’s clubs, ball and golf bag for the next decade. He had been without an equipment contract since the end of last year, when Nike announced it was to withdraw from that market.

Confirmation of McIlroy’s new branding – he recently signed a 10-year extension to a Nike apparel agreement worth $200m alone – arrived at the Players Championship, which begins at Sawgrass on Thursday. The figures involved endorse the Northern Irishman’s status as one of the most marketable individuals in global sport with TaylorMade’s deal believed to be their biggest fiscal commitment to any golfer.

“I tested different combinations, a lot of different stuff, and I came to the conclusion that this was the best way forward for me to try and improve, try and win more, try to get back to world No1, try to win more majors,” McIlroy said. “So I’m really excited about that.

“I tested quite a few balls and the one that I landed on was really it; the ball was what led me to this point because this is the best ball I’ve ever hit. Then it was just about trying to match everything up to that.”

McIlroy had spent the early part of this year alternating between TaylorMade and Callaway clubs. He also played with a Titleist ball but that was never a long-term solution after the four-time major champion bemoaned its performance during the Masters in April. An all-in equipment deal was always likely but McIlroy had been adamant he would have to be fully comfortable with the tools at his disposal before putting pen to paper. McIlroy will use TaylorMade M2 woods, prototype blade irons and the TP5x ball.

McIlroy joins high-profile golfers such as Dustin Johnson and Jason Day in using TaylorMade clubs. It may be that TaylorMade is more attractive as a business proposition with such marquee names on its roster, amid reports that Adidas is looking to sell that wing of its operation.

Danny Willett has confirmed a split with his long-time caddie and close friend Jonathan Smart. Willett’s bag man departed after the first round of the RBC Heritage event last month following a row between the pair. Sam Haywood, who was Willett’s best man, will caddie for the 2016 Masters champion this week.

“It was tricky,” said Willett. “It is a shame how things went; we have only spoken in little bits. I think it needs time to settle down. There is almost no point in talking straightaway because you might say something that is irretrievable. We have just kind of left it.”

Not at all - Galya unzipped her dress - it was always in a sticky shape, that's the point. Alexey was unhappy. Almost a week has passed, and it was not possible to feed Anya pills more than once a day. The result was, frankly, not very noticeable, even though it was. I had to look for helpers.

Yevgeny knelt down next to the bed and spread his mother's legs to the sides. He pressed his mouth tightly to her belly, they both smelled her juices coming out of Anna's crotch. Zhenya has never done this in his life. He only saw it on the Internet, but instinct took its toll and the guy was not going to stop.

Well, Tanka. I hear a fuss behind my back and Tankin's plaintive cry: Zheka. Don't go away.

Kindly placed at his disposal. He wanted to rip all the clothes on her, expose all this mature body, teasing with her femininity and get her all without a trace, in all possible positions and in. All possible ways, but he behaved like an obedient child, doing only what she was from him wanted.

The lips moved up and down, wrapped a tight ring around his penis, sucked it and pulled it in, then let go and gave way to the tongue, which, in turn, slowly moved along the rough skin, then quickly and quickly tickled sensitive areas. Gennady plunged into a world of endless bliss, but an experienced lady did not let him stay there for a long time.