Thinking of getting your first kalimba or have one and in need of some inspiration?

While a lot of kalimba playing musicians have some prior experience with learning music, many out there have decided to pick up the kalimba as their very first instrument. So take it slow and learn how to play at your own pace. The only competition you should be worried about is yourself.

There are a number of excellent kalimba players and each one has their own unique style that makes you want to learn to play. To help you out, here are a few kalimba artists that make your kalimba learning journey fun.

April Yang's videos have inspired numerous kalimba players into wanting to learn to play. A music lover since childhood, she fell in love with the kalimba, (or thumb piano), at first sight when her African friends showed her the African musical instrument in 2015.

Yang redesigned the instrument by rearranging the keys and altering the wooden materials to improve the sound. Through dedication, she spent over a year testing out more than 50 different versions before finally settling with the present design. To encourage others, Yang also prepared teaching materials and kalimba-exclusive music scores for beginners.

April Yang has a playlist for beginners called April's Kalimba Classroom, which are also available on Facebook). She even includes original kalimba tablature videos and many esthetically pleasing kalimba videos that have made many more fall in love with the kalimba.

Sandrah Araja, a very well-known kalimba player, is from the Philippines. She is known for her aesthetic kalimba videos, many of which include numbers by K-Pop bands. Most importantly, Sandrah Araja's YouTube videos include easy-to-read K-tabs for songs, making her channel a wonderful source for new music to try.

Sandrah Araja is also on Instragram and other social media sites. To know a little more, she recently gave an exclusive video interview you might want to watch.

If you're looking to be inspired by some contemporary kalimba playing, check out these artistic styles of YouTube music videos by Yohei Kisanuki, a Japanese kalimba player. He specialises in playing the chromatic kalimba and a bass guitar.

Eva Auner, a youthful kalimba player, creates dreamy cinematic videos of herself playing this charming wooden instrument. A few years ago she came upon kalimba playing videos on YouTube and fell in love with the instrument. Her family gifted her one on a birthday and the rest it history.

Auner has had previous experience with playing the piano during her childhood years, which made it easy for her to get accustomed to the kalimba. 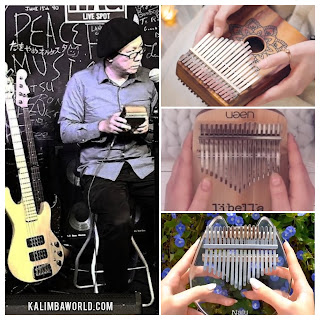 Do you know some more musicians you think other kalimba fans should be following? Link them in the comments below!

Kalimba and kalumbu are the names of two of the best known Zambian musical instruments. But here, as in most other parts of southern Africa, almost all instruments that did not have a significant functional place in traditional society have dwindled or died - those which were played for fun, for solace, for walking, for passing the time, for expressing one's opinion on any subject, for private working out of the perculiar African challenges of pattern playing and perception. Young people today play the guitar instead. We are fortunate to be able to present here a selection of the highly attractive, yet simple and catchy, individual and idiosyncratic 'little' musics of these two Zambian instruments, as they were recorded on the spot. Some performances are quite extrovert, but some more introverted, even meditative.

What are they? "Thumb piano" is a generic, westernised name for a range of different sub-Saharan lamellophones (instruments played by plucking tuned fixed metal tines or keys). Usually, thumb piano refers to either the mbira or its more modernised variant, the kalimba.

Who uses them?Ephat Mujuru, Garikayi Tirikoti and Stella Chiweshe are three of the biggest names in 20th-century mbira. In western rock, pop and jazz, Earth, Wind, & Fire, Jens Lekman, Imogen Heap, Björk, King Crimson and Pharoah Sanders have sprinkled thumb pianos on their work. Here's a Spotify playlist. The act that has transcended the usual "world music" western ghettoisation of indigenous musics though are the brilliant Konono No 1, whose grids of homemade electric likembé, amplified through buzzing, distorted megaphones, almost verge on ancient, African techno – the Congolese group are more likely to be found at All Tomorrow's Parties than Womad.

How do they work? Traditional mbira music is cycles of polyrhythmic, interlocking patterns. Typically a composition will consist of 48 beats, organised into four phrases of 12 beats. Time signatures are ambiguous (mbira pieces often seem to merge 3/4 and 4/4 time) and are tricky to transcribe as the traditional instruments would often not be created to specific tunings or scales, and would vary in frequencies from mbira to mbira.

Where do they come from? The first recorded instance of thumb pianos dates back to the 16th century, but it's accepted that they've been around a hell of a lot longer than that. The mbira is the national instrument of Zimbabwe, where it holds an important place in all spiritual, political and artistic matters of the Shona people – so most people belonging to that culture will have some working knowledge of the instrument since childhood, even if they aren't musicians themselves.

Why are they classic? Something odd happens when someone is playing a thumb piano skilfully – the separate tones of the stroked tines start intermingling and overlapping, making it sound like an orchestra. When you add more players, and different patterns cycling in and out of phase with each other, you get a warm, intricate patter of sound.

What's the best ever thumb piano song? Nhemamusasa is regarded as being one of the classic traditional song-patterns. In the modern canon, Konono's Paradiso is pretty ace.

What exactly makes a mbira "song" is open to interpretation, as no composition is a fixed structure – but rather a set of subtly changing musical ideas weaving in and out of each other, which vary from performance to performance and tradition to tradition. What makes the song a "song" is often just a consistency between the notes played across the patterns – mbira tunings and keys are usually named after the traditional pieces which use the same notes.

Shona thumb piano players often attach shells or bottle caps to the wooden soundboard of the instruments, creating a buzzing sound that the Shona believe attracts the ancient spirits with which they use the mbira to communicate.

The mbira may be used to call a spirit to possess a medium. However, it is said the spirit will only be moved to enter the medium if the mbira playing is particularly beautiful or skilful.

In Christian-colonised Rhodesia, the mbira was frowned upon as a "heathen" instrument. Consequently the mbira became a powerful emblem of the struggle to reconnect native people with African spirituality and traditions, ultimately mobilising a demand for independence.

In the 1960s, the ethnomusicologist Hugh Tracey developed a new, western scale-friendly version of the kalimba, which was mass-produced and sold in American toy shops. This was the first introduction of the thumb piano to everyday western culture. The most recent western evolution of the thumb piano is the handcrafted, five-octave Array Mbira.

She sat down in the next chair and began to watch TV with me. They showed cartoons, and she said that her children also love to watch them. We talked a little about this. And then she changes her position: sit down and folds her legs, while her legs open just above the knees, the robe spreads a little and I see that she. Has huge white boobs.

I have something else for you. From a large case she took out some feathers, folded like a fan. This fan was crocheted at the long end of a twisted wire, with a large butt plug threaded on the tip of the other end. What is it.

She frightened me by lightly touching my shoulder. I was sitting sideways to the door, besides, my eyes were blissfully closed, the device was humming, I did not hear Sarah come in. I turned off the. Hairdryer. And she slid the latch on the door.