Coffee In A Half Shell, Caffeine Power! 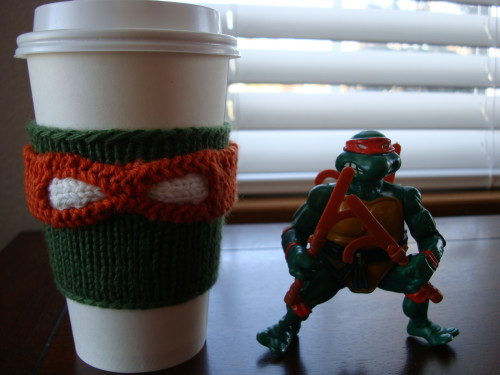 With the latest movie hitting the box office, I went in search for some TMNT (Teenage Mutant Ninja Tutorials) to share with you all! I found this cool coffee cozy knitting pattern on Ravelry, designed and posted by Strawberry Knits. The mask actually ties in back, and you can of course pick the color of your favorite turtle for your own ninja-powered coffee accessory.  You can download the pattern free, and there’s a simpler version where the mask is knitted as part of the body of the cozy instead of separately. You even have the option of downloading just the written pattern or a pattern and photo tutorial.  Have at it, knitting ninjas!

Category: Craft, Geek, Movies, Tutorial | Comments Off on Coffee In A Half Shell, Caffeine Power! 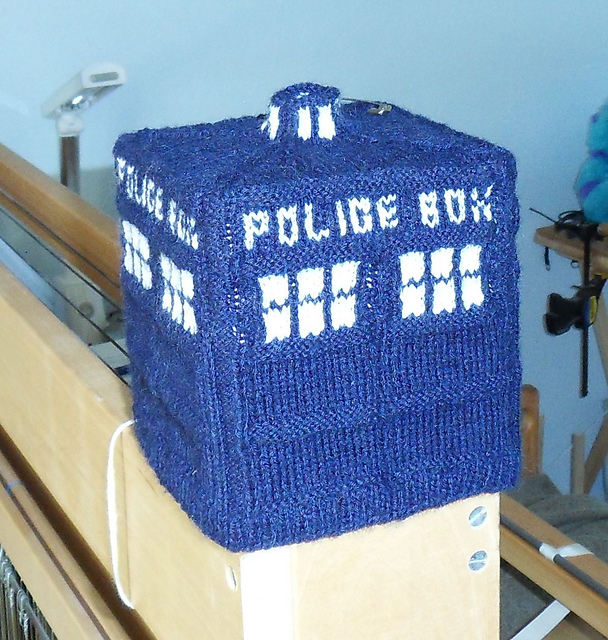 In honor of the recent Doctor Who premiere, AND I Love Yarn Day (coming up on 10/17), I bring you a Doctor Who knitting project: a TARDIS tissue box cover by Charla Henney.

I love the clever design that allows you to pluck tissues from the little light beacon at the top.

How are you liking the new season of the Doctor? How will you honor I Love Yarn Day? Share with us in the comments below!

Category: Craft, Geek, TV | Comments Off on The Doctor says bless you! 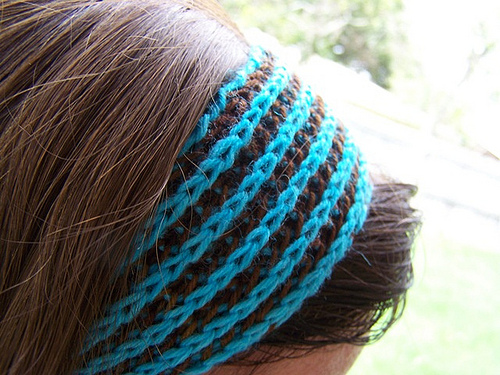 Who else is counting down the days to the premiere of the next season of Doctor Who? If your fingers are itching to get geek-crafty as you wait, check out H3Dakota’s 10th Doctor-inspired knit headband.

So are you a fan of 10? Or is another “your Doctor?” (David Tennant is my personal fav.) 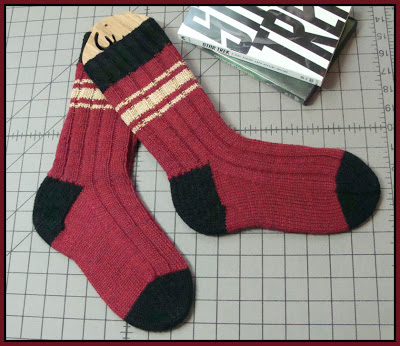 Linda Jo Park, of BeadKnitter Patterns, has created some out-of-this-world socks in honor of Captain Picard from Star Trek. You can find her pattern here.

She also suggests that the pattern could be easily adapted to reference other characters:

There’s no reason why a person couldn’t do them in Captain Kirk gold, Spock blue (you get two choices there), or even Deanna Trois lavender. Or perhaps you’d rather have Gorn green.

What color combo would you choose? Let us know in the comments below!

Category: Craft, Geek, TV | Comments Off on Boldly Going Where No Socks Have Gone Before 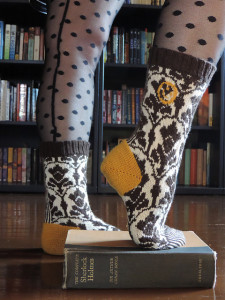 Is it just me, or has it been waaaaay too long since there’s been a new BBC Sherlock episode? January 2014 was FOREVER ago! Word is there will be a one-off Christmas special (set in 1895! Interesting!) this year, with the fourth season/series of three new episodes in filming in spring 2016.

Until then, there are seasons/series 1-3 to binge watch, and this lovely sock pattern by Megan-Anne Llama, of Geek-A-Long fame, to cast on to your needles. She aptly named it Shersocks.

She did a spot-on job recreating Sherlock’s iconic wallpaper in the colorwork chart, complete with the yellow smiley face, and a contrasting bright yellow heel. Aren’t they fantastic?

What project do you currently have on the needles? (Or hook, if crochet is more your thang?) Share in the comments below and link us up! 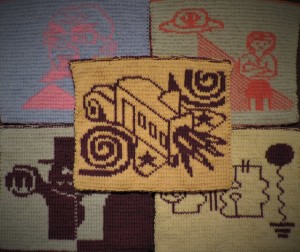 The gals at Lattes and Llamas are at it again – Jac and Megan-Anne are hosting another year-long nerdtastic “geek-a-long” mystery knitting project. I spotlighted their endeavor last year, and wanted to let you know they are deep into this year’s project.

They release an all-new geek reference block every week, so you build an afghan over the course of a year. They’ve already featured Bunsen & Beaker from the Muppets, the Flash, Indiana Jones, and Ms. Frizzle from the Magic School Bus.

I *love* that their patterns include both knitting and crochet instructions – it can be hard to find geek love for the crocheters out there, so I appreciate that!

What geek references do you hope they represent in upcoming patterns? Do you prefer knitting or crochet?

When I was a kid, being a geek was a bad thing. Geeks were the butt of jokes both at school and in movies and TV shows. They were nerds, dweebs, dorks, and totally uncool. Being smart was a somewhat acceptable form of geekiness, but if you liked sci-fi or Pokemon or pogs (remember pogs?!), forget it—you were permanently exiled from the “cool kids” club.

That’s why I’m so glad that these days, being a geek is a good thing. It’s not only okay to be smart, it’s encouraged. It’s cool to be into computers and video games. And everyone has a “geeky” thing they love, whether it’s Harry Potter or Doctor Who or Star Wars. Now people think you’re uncool if you don’t like one (or all!) of these “geeky” things! Knitting was also once seen as a totally uncool, dorky thing to do, but its resurgence over the past decade or so has landed it firmly in the cool kids club. We always knew knitting was awesome, but it’s great that now other people know it, too!

Today is Embrace Your Geekness Day, and although I don’t really go for these made-up holidays, I think this is one worth celebrating, especially because knitting and geeks go together so well! There’s a ton of “geeky” knitting out there, from patterns inspired by sci-fi shows to patterns based on mathematical equations. In honor of Embrace Your Geekness day, here are 5 of my favorite Interweave patterns to geek out to.

I know this is an entire magazine, not one pattern, but how could I choose just one of these fantastic projects? Harry Potter is my #1 geek thing—I fell in love with the series in high school and I’m still a big fan all these years later. I’d love to make everything in this issue, but Ginny’s Cardigan is my favorite. Or maybe the O.W.L. Mittens, or the Lestrange Cloak . . .

This scarf is the 2003 Knits team’s take on microbiologist June Oshiro’s DNA Scarf, which features a cable pattern based on the double helix found in DNA. The article in Interweave Knits Fall 2003 explains June’s inspiration for the scarf; the Knits team was so taken with the story—and the pattern—that each team member knit the scarf and put her own individual spin on it. Read the article on math- and science-inspired knitting, then make your own DNA Scarf! Alice Tang’s Phi Cowl  from Interweave Knits Spring 2016 is inspired by phi, or the golden ratio, which is the ratio between the width and sides of a pentagon. This ratio is evident in many geometric shapes and numbers in art and nature; for example, knitters often use the Fibonacci sequence to create stripes, and the ratio between adjacent Fibonacci numbers is phi. Cool, huh? The Eclipse Top from knitscene Summer 2013 uses an eyelet pattern to give the illusion of little eclipses moving across the sweater’s front panel. Designer Hilary Smith Callis, a project scheduler for NASA’s Stratospheric Observatory for Infared Astronomy, drew inspiration from her awesome day job for this pullover (and her other space-themed projects in the issue). Make this top in time for this summer’s big eclipse, happening Aug. 21! Not all geekery is about science and math—some is more literary. Heather Zoppetti’s Elegant Gloves from Jane Austen Knits 2013 are gorgeous and elegant and I absolutely adore them. I would love to wear these gloves while watching Pride and Prejudice (the BBC version, of course), sipping tea, and pretending I’m fancy.

What are your favorite geeky things? How do you incorporate them into your knitting? Let me know in the comments, then get out your light saber, turn on Game of Thrones, pretend your needles are wands, and get your geek on!

P.S. If you’re a crocheter, check out Crochetscene 2015, which features a whole story on geek crochet! Whether you love The Hunger Games or Doctor Who or just plain old science, you can find the crochet project of your geeky dreams in this issue.

Celebrate Embrace Your Geekness Day with Us! 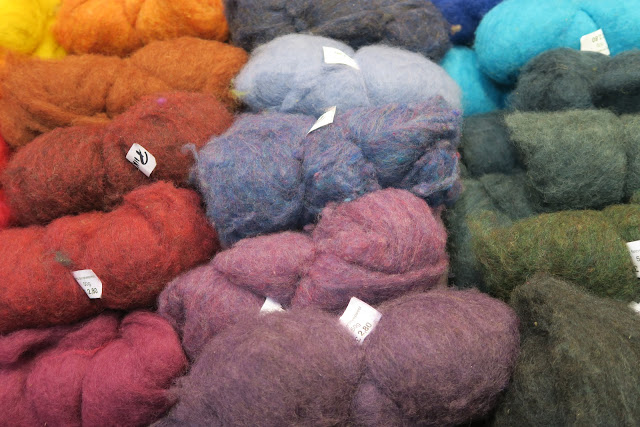 Enter below before Sunday 19 November - ** please note that winning tickets (10 in total for 5 winners) cannot be used on Saturday - the winner's details will be added to the show guest list and will be allowed to enter the show, with a friend, on their chosen day. If you can't wait, tickets are available now from the show website

Sours: http://www.thegeekyknitter.co.uk/
Geeky Girls Knit ~ Episode 201 ~ In Which It's A Knitting Odyssey

Summer’s coming to a close and your yarn stash is calling. What is a Geek Mom to do?

Now check out our favorite knitting projects—in many cases with free patterns:

1. Totoro Sweater (There are severalhow-toson Ravelry.)

Those of us who have A Trusted Friend in Science should probably also check out these free Portal Afghan Charts from The Happy Hooker, which look like they may intarsia really well.

5. Star Trek Potholders (Free pattern at Off the Hook Astronomy.)

Yes, this one’s crochet… but it’s too cute to skip.

And there’s a Totoro amiguri over here.

10. One Ring Scarf (Free pattern by Diana Stafford at Ravelry.)

What are your favorite geek knitting patterns? Tell us in the comments.

And in light of your geeked-up knitting, you may want to use Instructables’ how-to-guide to make Lightsaber Knitting Needles.

Liked it? Take a second to support GeekMom and GeekDad on Patreon!

On this page you will be able to follow links to find the patterns and tutorials that I have written myself - simply click on the name of the pattern to be taken to the correct page. I've also included where the pattern was originally published.
I aim to keep this page as up to date as possible, but you can always search my blog for the label 'patterns & tutorials'which should pull up all relevant posts! 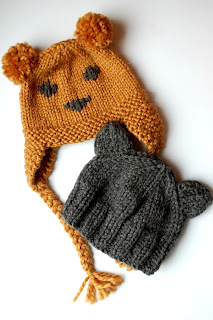 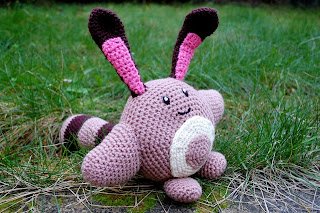 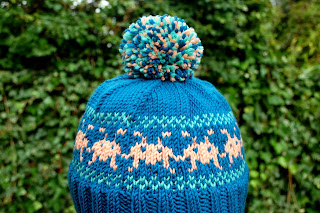 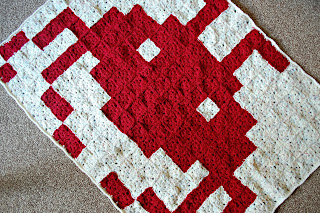 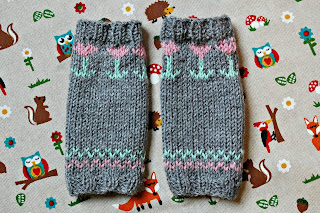 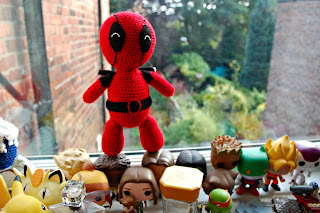 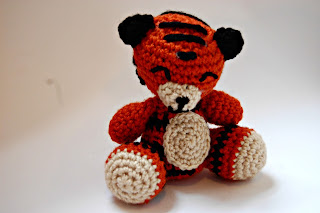 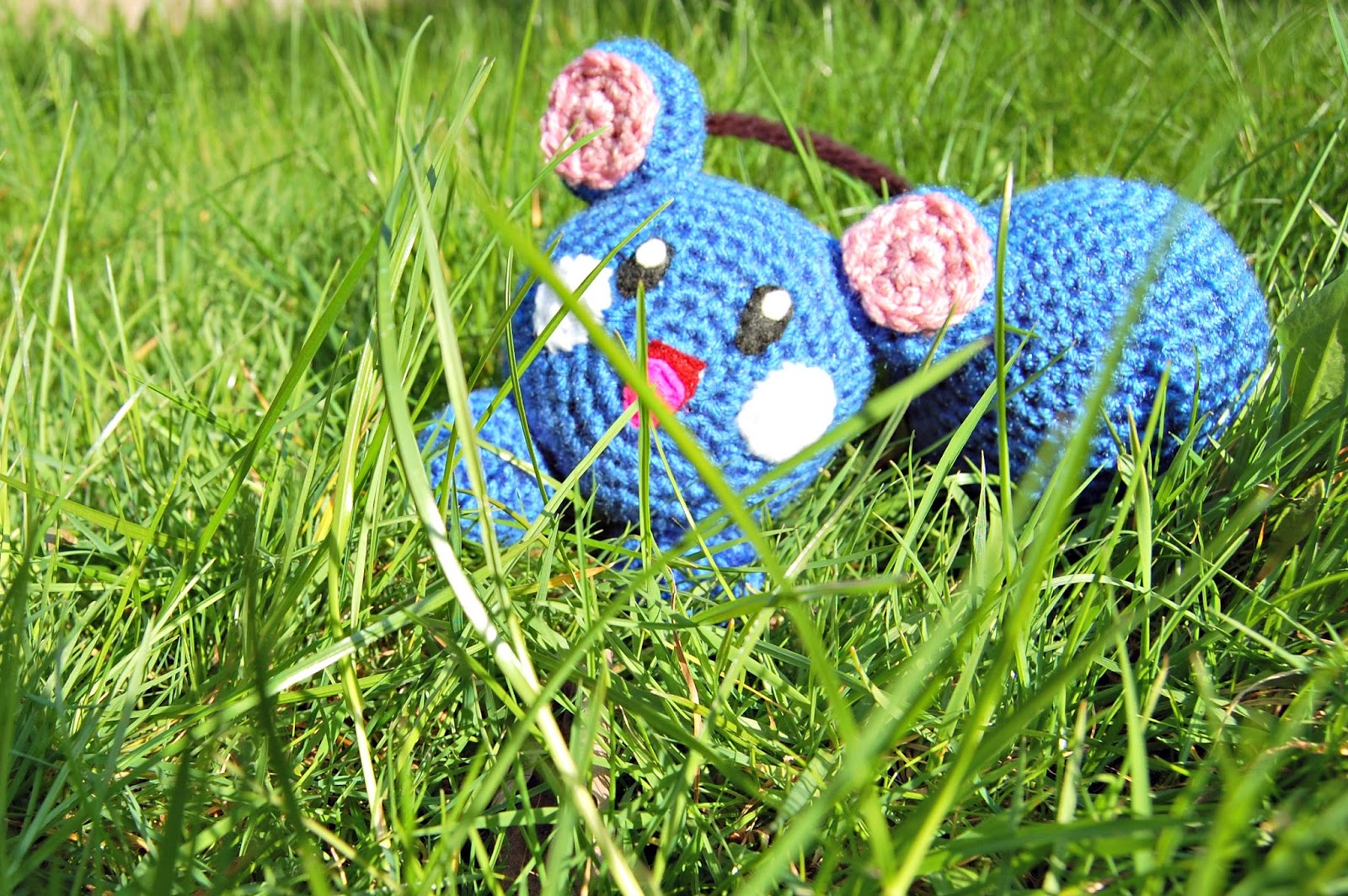 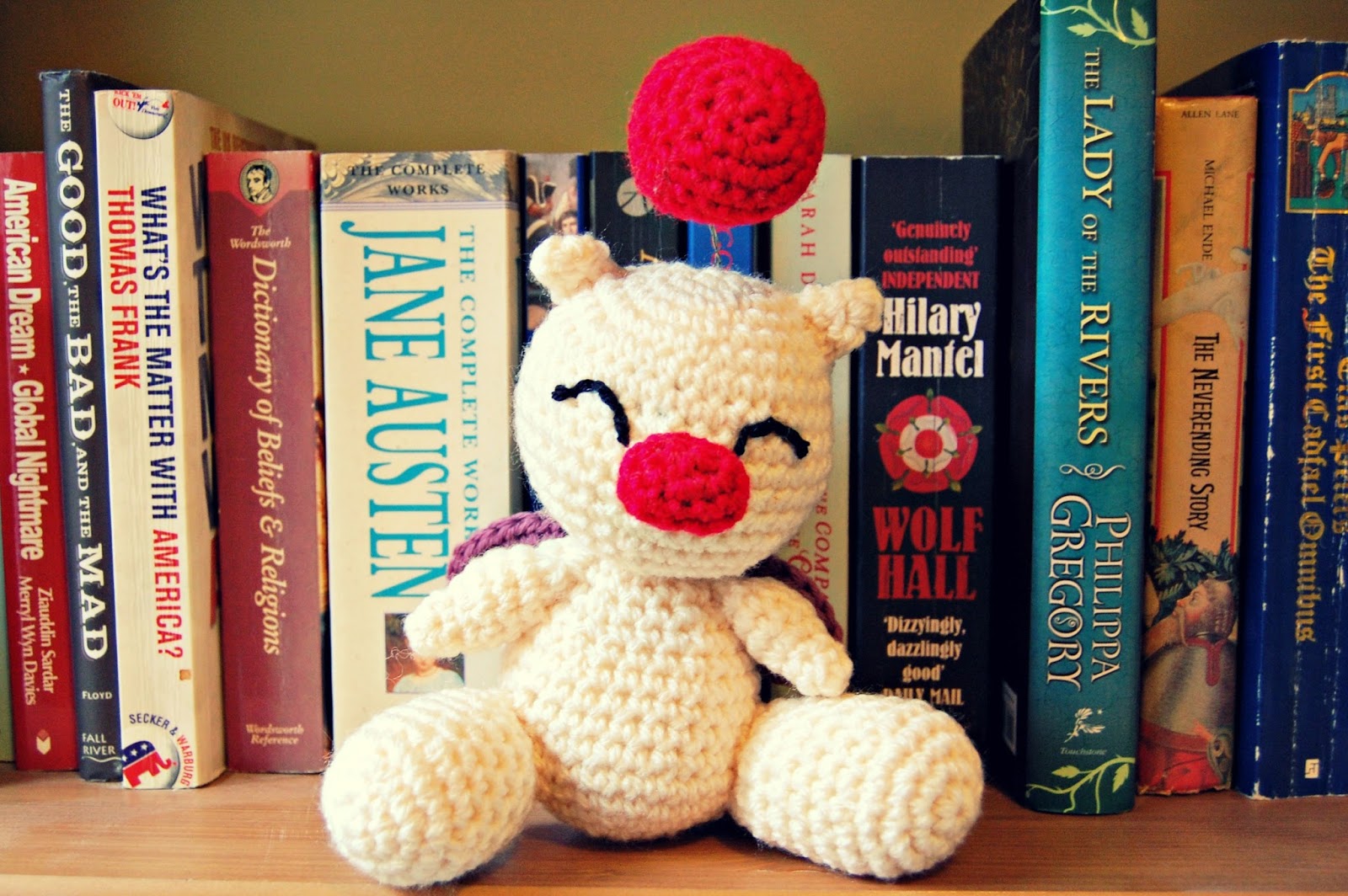 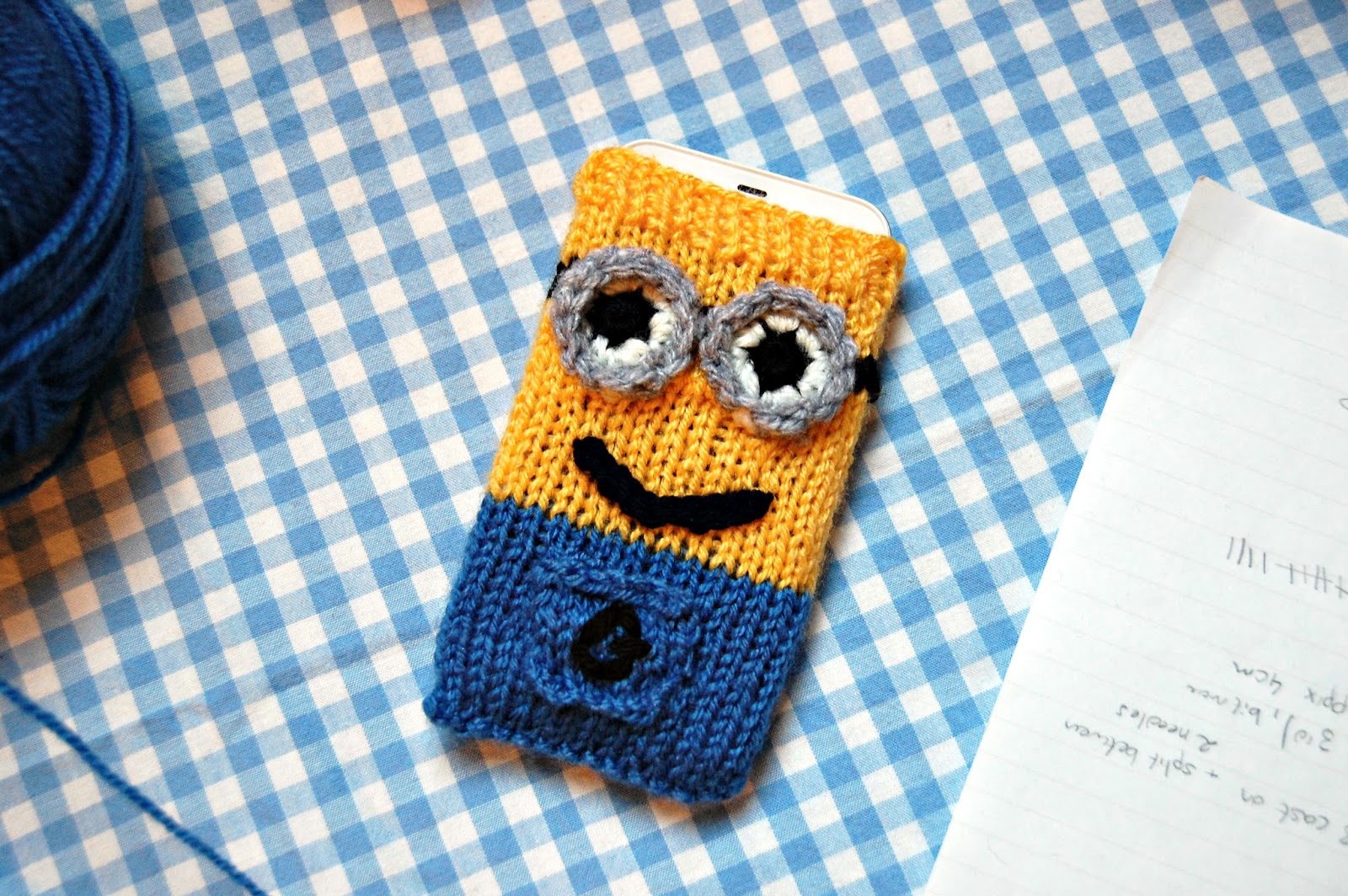 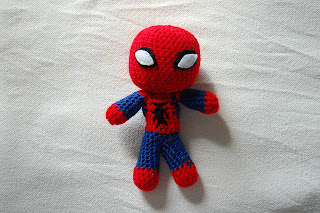 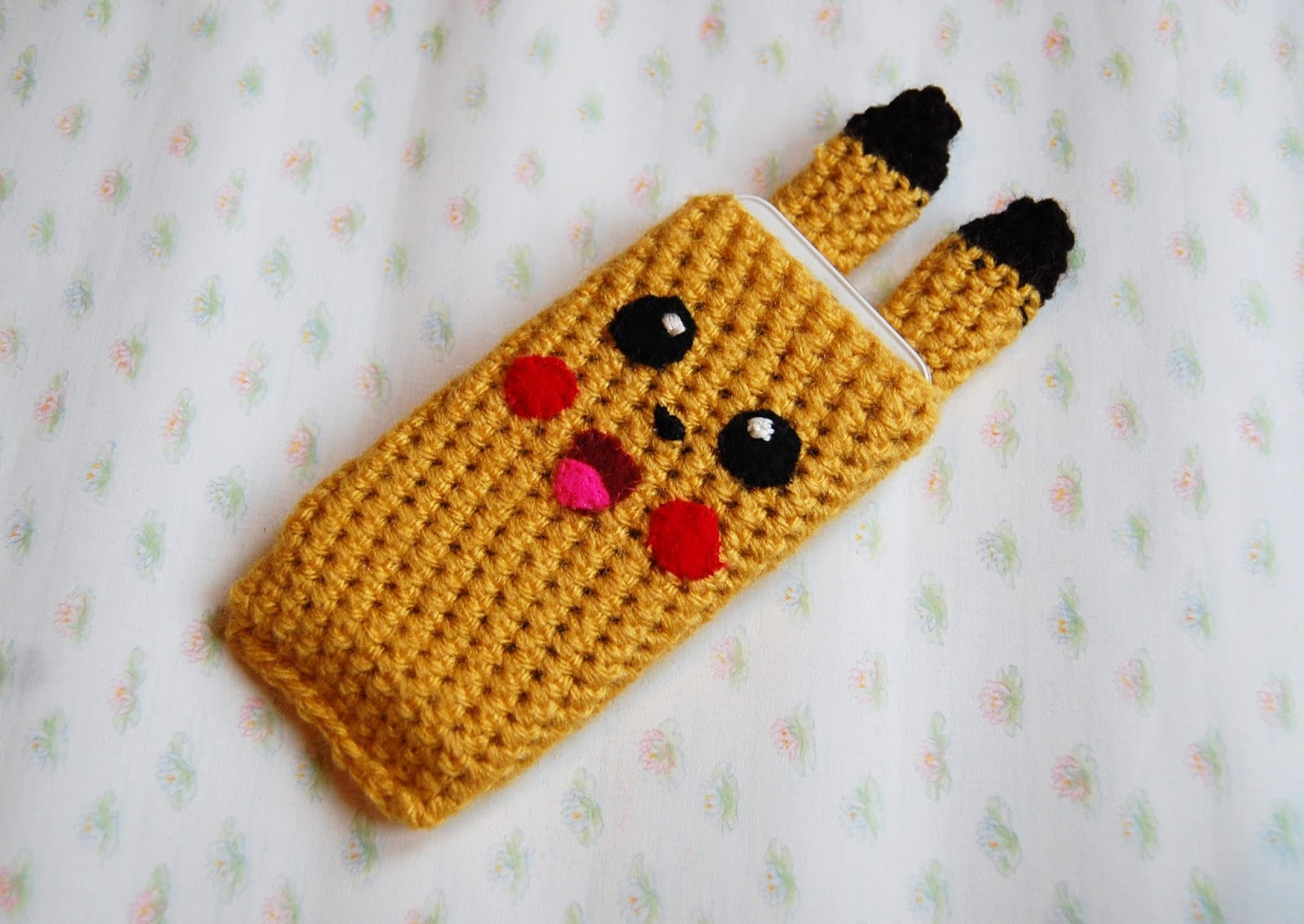 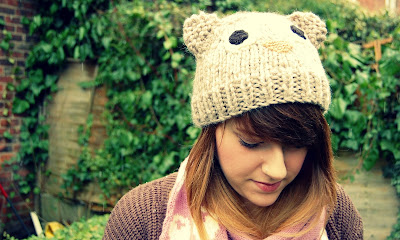 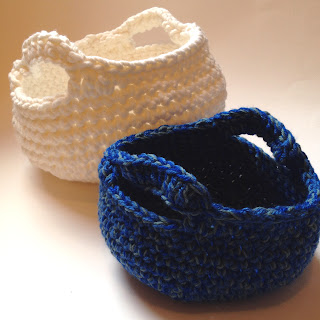 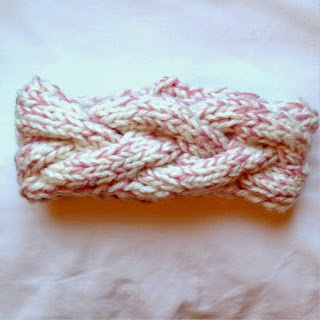 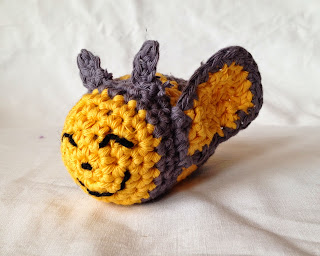 how to block your knitting - free tutorial (blog) 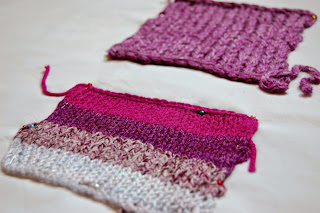 All patterns featured and linked on this page are my own, copyright 2014-2015 jenny riley/ the geeky knitter.
You may not reproduce these patterns without my permission, nor may you sell these patterns or items made from these pattern.
Sours: http://www.thegeekyknitter.co.uk/p/patterns.html
Geeky Girls Knit ~ Episode 201 ~ In Which It's A Knitting Odyssey

This cannot be called a word like it. I think there are no such words. It is necessary to feel, to move, to move through it personally and only then, perhaps, you will understand what it is. But it is you who describe the situations in which I have this or that feeling.

How many times can I tell you: if a man wants to finish you one more time, let him pay again. Dumbfounded, Marie looked in amazement at her. Friend, who allowed some peasant to stick her fingers in her in such a crowded place. No, something is clearly going on with Jeanne. But if I want to.